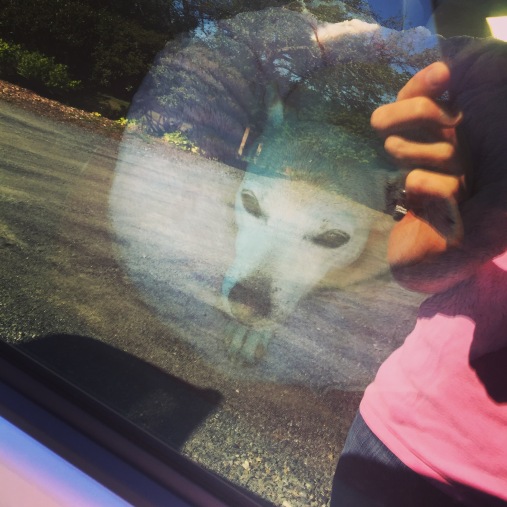 For the first night since Nina died, I slept through the night.  Nina died at daybreak, but she’d been up during the night and I’d found her under the sewing machine table at about 4am.  My final walk out to the car with Nina was serenaded by songbirds, who have reminded me of this moment each morning for days.  This morning it was light out when I awoke.  Quiet.  Making a cup of coffee, I realized that my parents had already been out in their car because the garage door was open.  That would be the second time my dad had driven my mom to the hospital in a week.  I remember talking about Nina as I drove my mom home from the hospital the first time.  We talked about how old Nina was getting and how her symptoms were fluctuating and causing confusion.  Would this be Nina’s last illness?

Of course we talked about my mom’s illness, too, but mostly that conversation centered around how difficult it was to convince the doctors to release her.  That first time it had sounded like they were going to admit her against her wishes.  But today was not a problem.  She flew through there and out the door into the waiting car.  But this time Nina was gone.  I had slept through the night and missed the songbirds.  I would continue to walk my mom’s dog, but would never walk Nina again.

That is, unless you count the sense I feel when walking the old logging road that Nina is off in the woods “following” me.  She would often walk surreptitiously on the upper or lower side of the trail, sometimes ahead of me and sometimes behind.  But she always knew where I was.  She did this during her last couple of walks the day before she died.  After several days of being unable to handle walking the trail, she had been unusually perky that day.

When I walk the trail now, I imagine her out in the woods, just barely hidden from view.  I don’t need to have her in my line of sight, but I’m aware of her presence.  While she lived, this was mainly a habit I had.  But now it’s a choice.  I want to connect with her, but I know I’ll never see her or hear her stepping.  That’s okay.  I accept it.  But I can still relive the experience of knowing she’s with me.  I can keep her in my mind and in my heart.

Assuming she’s in Doggie Heaven now, (a belief that I actually haven’t needed to rely on this time but that helped me survive my first dog’s demise), Nina would not be playing fetch or chasing frisbies or whatever it is dogs are imagined to do up there.  Nina would be “hunting” just like she did on earth.  She’d be poking around the woods or around the field, sniffing out chipmunks and hedgehogs, and fox and deer. 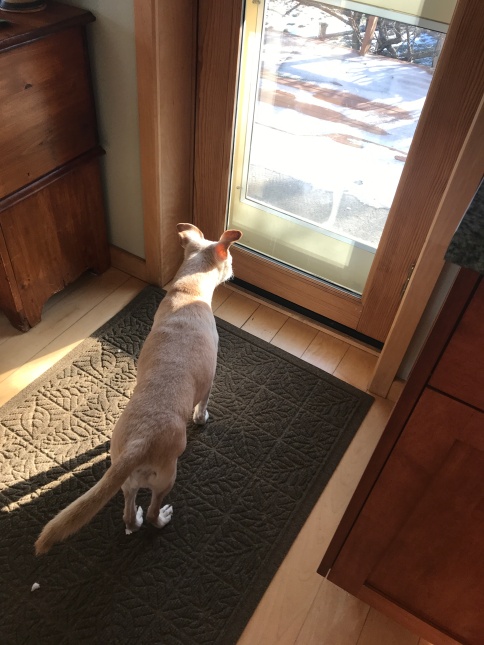 So I’ve been letting Nina be in Doggie Heaven “Earth Version” as I walk my parents’ dog, Willie.  They used to “hunt” together sometimes, especially at the place on the trail where I turn around to go back.  They would linger in the woods where the deer tended to travel from the woods to the field.  We never saw deer while in there, but I saw the signs.  I often spot when the deer enter the woods from the field and it takes them right up to the dogs’ favorite “hunting” spot.  (Neither dog had ever been on any human sort of hunting expedition.)

I love this video because of Nina’s patient tolerance of me with my camera phone, in this case with the SnapChat app.  She did not like the camera pointed at her.  In fact, she didn’t like my phone or my ipad at all.  Stay through to the end to see her patiently tolerant expression. And her banana hat.

I said yesterday that my walks with Nina were rain or shine, but in the case of the rain shown in this video, we headed right into the house after returning home during the start of a dark storm.  Stay through to the end to see the massive damage Nina has done over the years to the outside of the door where she would scratch to be let back in.  I will miss that sound, no matter how irritating it once could be.  She’s never coming back inside, but I know she misses me, wherever she is.  Even if it’s Doggie Heaven.

2 thoughts on “I Didn’t Break Down Today”